b. circa 1760
Family
Casper Noel was born circa 1760 in Paradise Township, York County.1 He was the son of John Noel and Margaret (?)1

Family
Catherine Noel was born in York County.1 She was the daughter of Andrew Noel and Theresa (?)1 She married John Lowstetter on 26 April 1801 in Conewago Chapel, Adams County.1

Family
Barbara Noel was born in York County.1 She was the daughter of Andrew Noel and Theresa (?)1 She married Frederick Warren on 2 June 1807 in Conewago Chapel, Adams County.1

Family
Elizabeth Noel was born in York County.1 She was the daughter of Andrew Noel and Theresa (?)1 She married Paul Miller.1

Family
Theresa Noel was born in York County.1 She was the daughter of Andrew Noel and Theresa (?)1 She married David Warren on 2 October 1810 in Conewago Chapel, Adams County.1

b. 12 May 1768, d. circa 30 March 1826
Family
Peter Rote was born on 12 May 1768.1 He was the son of George Rote.2 He married Elizabeth Kiester, daughter of George Kiester.3,4 He married Ester (?)5 He died circa 30 March 1826 in Logan Township, Centre County.6
Peter Rote and Elizabeth Rote lived in West Buffalo Township, Northumberland County, Pennsylvania. Peter was a farmer and operated a grist and saw mill. The Rote family lived in a round-log cabin.7,8,9 He and Elizabeth Rote moved to Haines Township, Centre County, Pennsylvania, circa 1807.10
Peter Rote moved in 1823 to Logan Township, Centre County.11 He leased 250 acres in Logan Township, Centre County, Pennsylvania, on 5 April 1821 from Mathias Snook of Union County, Pennsylvania on a promissory note in the amount of $77.21. Mathias Snook apparently sold the land and signed over the note to John Kleckner, also of Union County, on 12 April 1821 or 1822.12,5
Peter Rote died intestate (without a will). His widow Ester turned over responsibility to settle the estate to Peter's oldest son John on 26 May 1826. In an article of agreement dated 25 May 1826, John's brothers George, Griffen and Paul leased their father's farm for a period of three years, During that time, they were to build a barn that was apparently to have been built per an agreement between their father and the property owner John Klechner. They were also to harvest and thrash the grain on the land and provide for Peter's widow and minor children. It appears that Peter's personal property was sold in a public sale and the farm was no longer leased by any of Peter's sons on 14 November 1828.5,13 He died leaving minor children and his older son George Rote was appointed guardian of Francis Douglas Rote on 26 August 1830.14 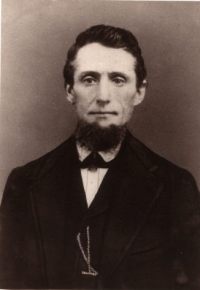 b. 14 July 1826, d. 20 March 1912
Family
Samuel Adams Thomas was born on 14 July 1826 in Woodward Township, Centre County, Pennsylvania.2,3,4,1 He was the son of Samuel Thomas and Elizabeth Rote.2,3,4,1 He married Elizabeth Grove in 1848.5 He married Abigail Ketner, daughter of William Ketner and Elizabeth Derr.6 He married Aurelia Power, daughter of Thomas Power and Mary Phillips, on 21 March 1872 in Franklin, Venango County.7 He died on 20 March 1912 in Hydetown, Crawford County, Pennsylvania, at age 85.1,2,3,4 He was buried in Fairview Cemetery, Cherrytree Township, Venango County, Pennsylvania.1,4,3
Samuel was a blacksmith by trade as was several of his brothers. According to his obituary, Samuel operated a general store and blacksmith shop near Wallaceville, Plum Township until the beginning of the oil excitment when he moved to the Oil Creek valley and began making oil well tools. His obituary further states that it was "claimed that he designed the jars now [1912] in use. While Colonel Drake was drilling his well near Titusville, Mr. Thomas called on him and requested to see the tools in use. Drake refused the permission and Mr. Thomas went to Franklin, where he inspected teh tools used in drilling salts wells down teh Allegheny River, later using the ideas in the manufacture of oil well tools."5,8
He was elected Sherriff of Venango County on the Republican ticket in 1861.5 It was probably around this time that he moved to Franklin, Venango County, Pennsylvania.5 Samuel was living in Franklin, Venango County, Pennsylvania, in 1870 working as a blacksmith. His family were not listed as living in his household. His children were living with other relatives.9
Samuel was living on Buffalo Street, Franklin, Venango County, Pennsylvania, in 1880 where he worked as an "oil operator." According to his obituary he worked in the Fagundus and Bradford oil fields, "amassing a fortune which later was lost."10
Samuel and Aurelia were living on Liberty Street, Franklin, in 1900 with their daughter Elizabeth. Samuel had been elected county commisioner in 1899. At the end of his term he retired and lived with his children.11,5