b. 8 October 1823, d. 3 August 1870
Family
Anna Maria Long was born on 8 October 1823 in Miles Township, Centre County, Pennsylvania.1 She was the daughter of Samuel Long and Eva Hershberger.1 She was baptized on 25 January 1824 in Lutheran/Reformed Church, Rebersberg, Miles Township, Centre County.1 She married Michael Lamey Jr.2,3 She died on 3 August 1870 in Pettis County, Missouri, at age 46.3
Anna Maria Long also went by the name of Mary Long.4 She and Michael Lamey Jr. lived in Summit County, Ohio, in 1865.3 She and Michael Lamey Jr. lived in Pettis County, Missouri, in 1867.3

b. 13 March 1828, d. 3 July 1888
Family
Margaret Long was born on 13 March 1828 in Miles Township, Centre County, Pennsylvania.1 She was the daughter of Samuel Long and Eva Hershberger.1 She was baptized on 10 August 1828 in Lutheran/Reformed Church, Rebersberg, Miles Township, Centre County.1 She married Joseph Weikal.2 She died on 3 July 1888 in Jackson Township, Ashland County, Ohio, at age 60.3

b. 15 November 1830, d. 21 February 1927
Family
Samuel B. Long was born on 15 November 1830 in Logan Township, Centre County, Pennsylvania.1,2 He was the son of Samuel Long and Eva Hershberger.1 He married Eliza Louisa Thomas, daughter of Samuel Thomas and Elizabeth Rote, on 21 February 1854.1 He died on 21 February 1927 in Akron, Summit County, Ohio, at age 96.3,4 He and Eliza Louisa Thomas were buried in Uniontown Cemetery, Uniontown, Lake Township, Stark County, Ohio.4
After leaving school, Samuel worked as a house painter steadily for about fifteen years. In 1854, he removed to South Bend, Indiana and remained there about twelve months, then returned to Pennsylvania. During the oil excitement, he was engaged for a short time in buying and selling oil lands, and his operations were generally successful. He also worked at cabinet-making for several years.
On 28 March 1867, he removed to Green Township, Summit County, Ohio and settled upon a farm near East Liberty. After about eight years he sold this farm and purchased 118 acres. During the summer of 1880, he erected a very neat dwelling house on this farm. By 1900, he and his wife had retired and where living in Lake Township, Stark County, Ohio.5,6,7,8

b. 1 July 1839, d. 11 February 1907
Family
Eliza Louisa Thomas was born on 1 July 1839 in Clearfield County, Pennsylvania.1 She was the daughter of Samuel Thomas and Elizabeth Rote. She married Samuel B. Long, son of Samuel Long and Eva Hershberger, on 21 February 1854.1 She died on 11 February 1907 in Uniontown, Lake Township, Stark County, Ohio, at age 67.2,3 She and Samuel B. Long were buried in Uniontown Cemetery, Uniontown, Lake Township, Stark County, Ohio.3
Eliza Louisa Thomas was known as Louisa.

b. circa 10 October 1805, d. 20 December 1852
Family
Samuel Thomas was born circa 10 October 1805 in Pennsylvania.1 He married Elizabeth Rote, daughter of Peter Rote and Elizabeth Kiester, on 14 July 1824 in Centre County.2 He died on 20 December 1852 in Oakland Township, Venango County.1 He was buried in Wallaceville Cemetery, Plum Township, Venango County.1 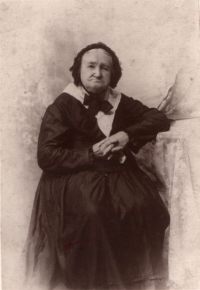 Family
Reuben Long was born in Logan Township, Centre County, Pennsylvania. He was the son of Samuel Long and Eva Hershberger.1 He died at the age of 3.1

b. 22 August 1839, d. 28 February 1899
Family
Elizabeth Bennehoff was born on 22 August 1839 in Cherrytree Township, Venango County.1 She was the daughter of Peter Bennehoff and Catherine Noel.1 She married Elias Long, son of Samuel Long and Eva Hershberger.2,3 She died on 28 February 1899 at age 59.3 She was buried in Wallaceville Cemetery, Plum Township, Venango County, Pennsylvania.4

On 30 January 1863, the administrator distributed $1104.20 among John Harshbarger's ten heirs or $110.42 each. The following is the specific accounting of the distribution:

b. circa 9 October 1773, d. 6 November 1849
Family
Christina Elizabeth Fehler was born circa 9 October 1773 in Tuplehocken, Berks County, Pennsylvania.1,4 She was the daughter of John Jacob Fehler and Anna Eva Behney.2,1,3 She married Johannes Hershberger in 1795.1 She died on 6 November 1849 in Summit County, Ohio.1,5 She was buried in East Liberty Cemetery, East Liberty, Summit County, Ohio.5 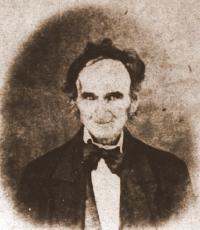 Jacob Baum
Jacob Baum was born on 16 June 1795 in Cumru Township, Berks County, Pennsylvania.2 He was the son of Johannes Baum and Elizabeth (?)1 He was baptized on 10 September 1795 in Trinity Lutheran Church, Reading, Berks County.2 He married Elizabeth Mark, daughter of Rudolph Mark and Barbara Walterberger.3 He died on 3 May 1865 in Oakland Township, Venango County, Pennsylvania, at age 69.4 Jacob and Elizabeth were buried in Demspeytown Lutheran Cemetery, Oakland Township, Venango County.5 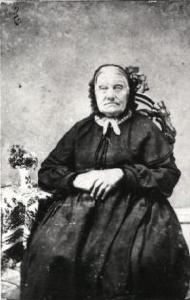 Elizabeth Baum and Jacob Baum moved to Venango County, Pennsylvania, circa 1837. The area where they settled was part of Plum Township until 1842 when it fell within the newly formed Oakland Township. They remained in this area the rest of their lives.5,6,7,8 She was named a benefitiary in the will of her husband Jacob Baum. According to the will, the primary care of Elizabeth fell to their son Daniel. Jacob willed that "during her natural life, the one third of everythng raised on the lands to which I bequeath to my son Daniel" was to go to the support of Elizabeth. For only two years after Jacob's death, one third of everything raised on Samuel's lands were to go to Elizabeth's support. However, "if the one third raised on the said lands that I bequeath to my son Daniel should at any time be insufficient to support my wife - that my son Samuel then in that care shall be required to give her a third." Elizabeth also was willed "all of the household furnature and other items, not particularly named and otherwise not disposed of; as also the one half of the house and cellar." Jacob also willed that his "sons shall find and chop; ready for the stove; a sufficient quantity of fire wood for" Elizabeth.9,10 Elizabeth and Jacob were members of the Trinity Evangelical Lutheran Church in Dempseytown.11 She was enumerated in the household of Daniel Baum on the 1870 Census of Oakland Township, Venango County.12 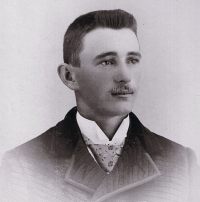 James McGarnnahan Thomas was born on 14 December 1871 in Oakland Township, Venango County, Pennsylvania.1,2,3 He was the son of John Milton Thomas and Lydia Malinda Baum.1 He married Bertha Mae Pritchard, daughter of Gabriel Pritchard and Elizabeth Ann Davis, on 22 April 1891 in Franklin, Venango County.4 He died on 1 January 1943 in Missoula, Montana, at age 71.5,3,2
James McGarnnahan Thomas was raised in a family of seven children Oakland Township. 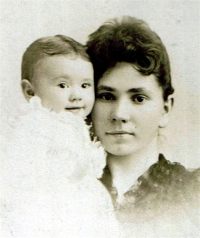 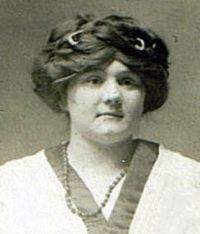 Olive Thomas
Olive Thomas was born circa 1896 in North Dakota.2 She was the daughter of James McGarnnahan Thomas and Bertha Mae Pritchard.1 She married Marion F. Eckman.2 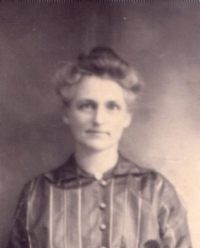 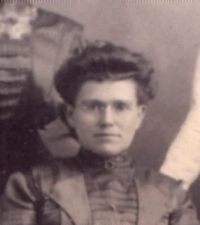 She and Reno Warren Pritchard raised a family of three daughters. 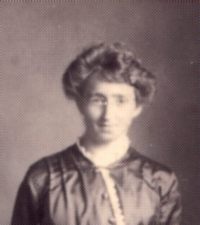 She and Hiram Pierce Lyons lived in 514 Egbert Street, Rocky Grove, Venango County, where they raised their daughter Stella.2

Nettie was an avid gardener and took great pride in her flower garden.3