b. circa 1861
Family
Alexander Thompson was born circa 1861 in Greene County, Tennessee.1 He was the son of Eli Thompson and Catherine Thompson.1

b. circa 22 March 1865, d. 19 July 1928
Family
Jane Thompson was born circa 22 March 1865 in Greene County, Tennessee.1,2 She was the daughter of Eli Thompson and Catherine Thompson.1 She married Salvador S. Kingsborough in 1891 in Gentry County, Missouri.1,3 She died on 19 July 1928 in Highland, Muddy Fork Township, Pike County, Arkansas.4 She was buried in Briggs Chapel Cemetery, Pike County, Arkansas.4
Jane Thompson and Salvador S. Kingsborough were living in Athens Township, Gentry County, Missouri, between 1900 and 1910 where Salvador worked as a farmer.5,6 Catherine was photographed with her daughters Jane and Maria and her granddaughter Kate Davidson who was born in 1903.

She and Salvador S. Kingsborough were living in Mine Creek Township, Hempstead County, Arkansas, in 1920 where Salvador was farming.7

b. December 1865
Family
Salvador S. Kingsborough was born in December 1865 in Missouri.1 He married Jane Thompson, daughter of Eli Thompson and Catherine Thompson, in 1891 in Gentry County, Missouri.1,2
Salvador S. Kingsborough and Jane Thompson were living in Athens Township, Gentry County, Missouri, between 1900 and 1910 where Salvador worked as a farmer.3,4 He and Jane Thompson were living in Mine Creek Township, Hempstead County, Arkansas, in 1920 where Salvador was farming.5 He was living in Muddy Creek Township, Pike County, Arkansas, in 1930 with his sons Ode and Joe.6

b. 1868, d. 1938
Family
George Thompson was born in 1868 in Greene County, Tennessee.1,2 He was the son of Eli Thompson and Catherine Thompson.1 He married Frances Folsom Beard, daughter of George Washington Beard and Mary Elizabeth Branaman, on 25 November 1903 in Seneca, Nemaha County, Kansas.3 He died in 1938 in Colorado Springs, El Paso County, Colorado.4,5,2 He was buried in Evergreen Cemetery, Colorado Springs, El Paso County, Colorado.2

b. 1 May 1880, d. 11 July 1972
Family
Arretta Belle Beard was born on 1 May 1880 in Viola, Mercer County, Illinois.2 She was the daughter of George Washington Beard and Mary Elizabeth Branaman.2 She married Gilbert Newton Thompson, son of Eli Thompson and Catherine Thompson, on 26 October 1897 in Albany, Gentry County, Missouri.1,3 She married Ove Flaten on 10 April 1915 in St. Joseph, Buchanan County, Missouri.4 She died on 11 July 1972 in St. Joseph, Buchanan County, Missouri, at age 92.5

b. 12 November 1830, d. 12 September 1910
Family
Julia Ann Morrison was born on 12 November 1830 in Hamilton Township, McKean County, Pennsylvania.3,4,5,1 She was the daughter of George Morrison and Lucrietia Morrison.2 She married Robert Melat Jr., son of Robert Melat and Elizabeth Kifer.1 She died on 12 September 1910 in Sugarcreek Township, Venango County, Pennsylvania, after falling down the stairs.3 She was buried in Franklin Cemetery, Sugarcreek Borough, Venango County.6,3

b. circa 1819, d. circa 1857
Family
Alexander McCarty was born circa 1819 in Pennsylvania.1 He married Elizabeth Melat, daughter of Robert Melat and Elizabeth Kifer.1,2 He died circa 1857 in Rockland Township, Venango County.2,3
Alexander McCarty was listed as the head of a family on the 1850 Census of Rockland Township, Venango County. The household consisted of Alex, his wife Elizabeth and daughters Sarah and Mary.4 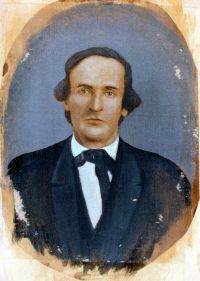 James was an expert mechanic and in 1798 was engaged by Cornplanter, the Seneca Indian Chief, to erect a mill at State Line and was taken by him with a party of Indians by canoe to the proposed location. Not being able to reach their destination the same day, they camped for the night on an island in the Allegheny River at Kinzue. James explored the island and found it to be one of the broadest and most fertile island that they had passed. Also there was a natural spring of pure ice cold water on the island. After the mill was completed he returned the same way and camped again on the island. A second survey only confirmed his good opinion of it as a desirable place. Two years later in 1800, he made an application to Harrisburg for a patent which was granted him at a price of twenty-five cents an acre. [This may have been the island that his father owned or lived. It would seem that he may have given the place to his father because it seems that he himself never claimed ownership of it.]1 James Morrison Jr. had settled in Warren County, Pennsylvania, by 1806. In that year, James was taxed for 183 acres, 2 cows, 2 oxen, and 1/3 of a sawmill which he apparently owned with his brother Samuel Morrison and a Jeremiah Morrison.4 He was taxed for 65 acres and a lot in the city of Warren in 1808. The land in lower Warren, known as Morrison's Flats was purchased by him in 1813. He built a large house there which stood 125 feet southwest of the intersection of Morrison Street and Levee Street.1 Apparently the land James owned was located in Conewango Township, Warren County, Pennsylvania. He and his wife spent the rest of their lives in Conewango Township.5

Family
Natalie Hoffman is the daughter of Michael Anthony Hoffman and Lisa (?)1

b. circa 1768, d. 9 February 1856
Family
Joseph Northrop was born circa 1768 in Connecticut.3,4 He was the son of Gideon Northrup Sr. and Esther Munson.2 He married Cynthia Blakeslee, daughter of Enos Blakeslee and Temperance Dunbar, on 27 July 1791 in Northbury Parish Church, Waterbury, Connecticut.5,1 He died on 9 February 1856 in Pinegrove Township, Warren County, Pennsylvania.1,4 He and Cynthia were buried in Willow Grove Cemetery, Lander, Farmington Township, Warren County.4

b. 17 February 1775, d. 30 November 1857
Family
Cynthia Blakeslee was born on 17 February 1775 in Watertown, Connecticut.4,5 She was the daughter of Enos Blakeslee and Temperance Dunbar.2,3 She married Joseph Northrop, son of Gideon Northrup Sr. and Esther Munson, on 27 July 1791 in Northbury Parish Church, Waterbury, Connecticut.6,1 She died on 30 November 1857 in Pinegrove Township, Warren County, at age 82.7 She and Joseph were buried in Willow Grove Cemetery, Lander, Farmington Township, Warren County.8

Cynthia Blakeslee and Joseph Northrop were living in Elk Township, Warren County, Pennsylvania, in 1840 with their son Eli, next door to their son Joseph.9