b. 23 July 1809
Family
Anna Morrison was born on 23 July 1809 in Warren County, Pennsylvania.1 She was the daughter of James Morrison Jr. and Abigail Meddock.1 She married Warren Leonard.1

Family
Warren Leonard married Anna Morrison, daughter of James Morrison Jr. and Abigail Meddock.1
Warren Leonard was listed as the head of a family on the 1830 Census of Corydon Township, McKean County, Pennsylvania.2

b. circa 1805, d. 15 January 1876
Family
Mary Ann Pryer was born circa 1805 in Pennsylvania.1 She was the daughter of John Pryor and Hannah Lovell.2 She married David Smith, son of Stephen Smith and Maria Stroup.3,4 She died on 15 January 1876 in Franklin, Venango County.1
Mary Ann Smith and David were also founding members of the East Grove Methodist Church in Sandycreek Township.5 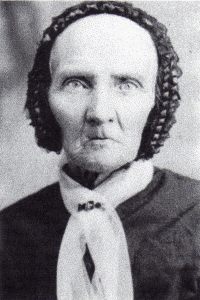 b. before 1755, d. between 30 June 1802 and 13 August 1802
Family
Stephen Smith was born before 1755 probably in Pennsylvania.2 He married Maria Stroup.3,4 He died between between 30 June 1802 and 13 August 1802 in Potter Township, Centre County, Pennsylvania.1
Research Note:
Concerning Stephen's family origins, Fisher's Snyder County Pioneers states that "it is believed that he [Stephen] came from Philadelphia County." According to biographies of Stephen's sons David and George, Stephen was the son of John Smith. The biography of David records that John was a native of France and came to Philadelphia with Stephen Girard. He died over 90 years of age. The biography of George adds that John Smith was the name of the first know ancestor, who came to America at an early date, and that the name of his wife or wives is unknown. It is likely that Stephen was the son of a John Smith, who immigrated to America from France and that Stephen moved to central Pennsylvania from the Philadelphia area. However, it is unlikely that John Smith came to America with Stephen Girard. Girard was born in 1750 making him a contemporary of Stephen and not Stephen's father. Further Girard did not immigrate to the Americas until 1776.5,6,7,8,9

b. before 1755, d. 1807
Family
Maria Stroup was born before 1755 probably in Pennsylvania.2 She married Stephen Smith.1,3 She died in 1807 in Potter Township, Centre County, Pennsylvania.1
Research Note:
According to a biographical sketch of Maria's son David, Maria's maiden name was Troup and David was born in Trouptown, Union County, Pennsylvania in 1781. However, I have found no Troup family or any reference to Trouptown located in the area of Union County. However, in Fisher's Snyder County Pioneers (a secondary source) there is mention of a Andrew Straub who "laid out the village of Freeburg, Snyder County, Pennsylvania, which at first was known as 'Straubstown', but later changed to Freeburg." Freeburg, originally in Penn Township, Northumberland County, became part of Union County in 1813 and part of Snyder County in 1855. There were several members of the Straub/Stroup family who lived in this area as early as 1762. Maria's future husband Stephen Smith moved into this area by 1778. Further, Stephen served in the American Revolution with several members of this Straub/Stroup family. Stephen and Maria's son John Peter was baptized in 1784 in the Mohr's Zion Church which was built and attended by members of the Straub family. Finally, Adam Stroup, probably a brother of the Andrew Straub mentioned above, attended the sale of Stephen's estate. In the inventory for the sale, Adam Stroup and his wife purchased one "old mare with a white face" and an old saddle. Adam was originally from Penn Township and was living in Centre County at the time of the estate sale. Adam and Andrew Stroup, who are contemporaries of Maria and Stephen, are believed to have been children of Johann Peter Straub and his wife Catherine Elisabeth, who settled in the Penn Township area as early as 1762. Peter Straub/Stroup was born in Germany, came to America as a young boy with his parents in 1733, and lived in the area that is now Lehigh County, Pennsylvania before moving to central Pennsylvania. I have found no source, primary or secondary, that proves that Maria's maiden name was anything other than Troup, but the circumstantial evidence suggests that it was Straub/Stroup and she may have been the daughter of Peter Straub/Stroup and his wife Catherina Elizabeth.4,5,6,7
Maria Stroup and Stephen Smith moved to Penn's Valley, Potter Township, Northumberland County, Pennsylvania, in 1792 according to one source. Potter Township was originally part of Northumberland County when it was formed in 1772. It became part of Mifflin County in 1789 and part of Centre County in 1800. However, Stephen purchased 40 acres of land in Chilesquerque Township, Northumberland County in 1794. In 1795 he purchased from Isaac Gilliland of Chilesquaque Township one yoke of oxen, etc. that John McWilliam had formerly in possession to pay a debt of 16 pounds. He sold the 40 acres in 1799. In 1798, Stephen was listed as a tenant on a 306 acre farm, owned by James Potter, in Potter Township, Mifflin County. The farm was valued at $2804 and a log house valued at $30. (Homes in that tax record were valued anywhere from $12 to $50.) As a tenant on the Potter farm, Stephen kept a tavern at the old fort which had been built in 1777 by General James Potter to defend the early settlers agains the Indians. The General's fort and property were passed to the General's son Judge James Potter, who was the Executor of Stephen's Will. A notation in Linn's 1883 History of Centre and Clinton Counties, states that Stephen Smith, a tavern keeper at the fort died in 1803. Also stated in Linn's History, Stephen was a residant of Potter Township in 1801 when Centre County was administratively setup in 1801 as were Peter Smith, William Smith and Henry Kephart. Between 1800 and 1802, Stephen was taxed with 300 acres in Potter Township.4,8,9,10,11
After Stephen's death, Maria continued to live in Potter Township. Her name appears on the Potter Township tax records for the first and last time in 1808. However, the articles on Maria's sons David and George state that Maria died in 1807. She probably died before the 1810 census and her youngest sons appear to have been living with their brother David in Potter Township. Stephen and Maria's sons continued to live in Potters Township until about 1820.12,4,13,14,15

b. 20 February 1837
Family
David Smith Perry was born on 20 February 1837 in Scrubgrass Township, Venango County, Pennsylvania.1 He was the son of John Perry and Mary Smith.1 He married Susan L. Madden on 30 March 1864.2