b. 9 March 1934, d. 31 August 2001
Family
Richard Francis Groner was born on 9 March 1934 in Oil City, Venango County, Pennsylvania.2,3 He was the son of Joseph F. Groner and Genevieve Helen McDonnell.1 He married Mary Ann (?)3 He died on 31 August 2001 in Rockville, Montgomery County, Maryland, at age 67.3 He was buried in Gate of Heaven, Aspen Hill, Montgomery County, Maryland.3
Richard Francis Groner was a graduate of Gannon University in Erie, Pennsylvania and did graduate work in economics at Catholic University in Washington, D.C.3 He served in the U.S. Army in Japan.3
Richard Francis Groner was began his Washington career with the Bureau of Labor Statistics at the Labor Department. He worked there for 10 years and for the D.C. Department of Employment Services for 26. Richard retired in 1994 as chief of the D.C. labor market information and research staff, which analyzed employment, the labor market and job growth in the metropolitan area. Among the trends he and his staff were credited with identifying were the effects of recession and job loss on the suburbs. The monthly reports also called attention to labor shortages and analyzed manpower trends by industry, and they were a prime source for journalists and other analysts. Washington Post reporter Anne Swardson wrote in a 1990 article that Mr. Groner had become “not just a respected member of the local economist network, but perhaps the leading expert on the unique economy of the District itself.” He was also an adviser to the Greater Washington Board of Trade and the Montgomery County public school system.3 He lived in Rockville, Maryland, in 1997.4

James Morrison served in the military during the American Revolution. In September of 1775, he enlisted in the service of the United Colonies at Path Valley, Cumberland County, Pennsylvania under Captain John Elliot and Lt. James Lawther. Shortly after, they marched to Amboy, New Jersey. He wrote in his pension application: "While at Amboy, I went with about five hundred others, volunteers of Staten Island where the British and the Hessians were building a fort. We attacked them and after a smart skirmish succeeded in driving them off." James is describing the first hostile demonstrations by the colonists against the British Army on Staten Island which occurred 16 September 1776. He remained at Amboy about two months when his time of enlistment expired and he returned home.
Later in the year he again enlisted in the Pennsylvania Line under Captain Thomas Askey. His company joined the forces of the Commander-in-Chief. On Christmas Eve, 1776, James was among the troops under the personal charge of General George Washington, which succeeded in crossing the ice-filled Delaware River at McConkey's Ferry, and marched on to Trenton where they scored a brilliant victory over the British and Hessians. A week later, they marched at night to Princeton, taking the British by surprise at daybreak and captured about three hundred prisoners including some officers.
After the victory at Princeton, they encamped at Morristown for the winter. He was discharged 10 March 1777, after an enlistment of four months and returned home to Path Valley (now located in Fannett and Metal Township, Franklin County, Pennsylvania). He served his third enlistment in 1777 for two months in Captain Robert Samuel's Company of Col. Archibald Buchanan's Regiment.
A fourth enlistment was in 1778 for four months in Col. John Armstrong's Regiment. Between 1778 and 1780 the Juniata Valley in Pennsylvania saw constant bloodshed. Commenting on the situation, James wrote in his pension application: "The Indians were then swarming about settlements and destroying everything they could lay their hands on." It was not until the Spring of 1781 that the settlers received aid from Cumberland County. Seventy men were brought in to the valley where they founded a garrison at Frankton. They were under the command of Col. Albright and Captain Young who had been sent for the purpose of closing the gaps in the Allegheny Mountains, through which the Indians were entering the valley. The settlers, however, became exasperated after a few weeks of this inactivity and formed their own scouting party and range through the country. They were encouraged in this by Lt. Ashan of Bedford Company who promised to add a company to their forces. James Morrison was one of the twenty-five volunteers who enrolled for this scouting party under Captain Moore.
His last service as a "ranger" was in 1781. According to his pension papers, "he never served in any other capacity than as a private and a volunteer, being blind in one eye, was not subject by law to military duty.3
During the Revolutionary War, he and the rest of the Morrison clan settled in Cumberland County, Pennsylvania. After the war he moved westward up the west bank of the Susquehanna River with his family, relatives and friends. As early as 1800, he his family came across Pennsylvania by portage to the headwaters of the Allegheny River at the present site of Port Allegheny. After camping there for several weeks, they went up the Allegheny and settled on the east branch of Pine Creek in southeast Warren County, Pennsylvania. He later built a house at Warren near the fort. This pioneer house, built of pine timbers hewn square, stood at the present site of Pennsylvania Avenue, West, in Warren. By 1805, he and his family were living on a large island near the mouth of the Kinzue Creek, Kinzue Township, Warren County. His remaining years were spent on this island which he owned and kept a large part of it under cultivation.3,1,4,5,6,7 He was a member of the Methodist Episcopal church.3

b. 5 January 1701, d. 5 May 1801
Family
Samuel Morrison was born on 5 January 1701 in Stewartstown, County Tyrone, Ulster, Ireland.1 He married Mercy Mayse in County Tyrone, Ulster, Ireland.1 He died on 5 May 1801 in Lycoming County, Pennsylvania, at age 100.1 He was buried in Pine Creek Cemetery, Lycoming County, Pennsylvania.1
Samuel and Mercy left Ireland for America in 1740 on board the ship "Sally of Coleraine". They arrived at the port of Philadelphia and went to Bucks County, Pennsylvania. In the 1780's, shortly after the the close of the American Revolution, Samuel moved along with his family to the west branch of the Susquehanna River and settled near the mouth of Pine Creek in Northumberland County (now in Lycoming County), Pennsylvania. He and Mercy spent the rest of their lives there.1,2
Samuel was to have been more that six feet tall and weighed over two hundred and fifty pounds. He had seen service in the border wars between the native Irish and the newly settled Scots. He often related to his grandchildren tales of these struggles which took such a toll on his father's family. One such story told of how when alone he was attacked by seven Irishmen, with only a pitchfork for a weapon. He saved his life by trusting the fork into his foremost assailant and throwing him over a stone wall. The others fled in fear, deserting their comrade.1

Samuel and Mercy left Ireland for America in 1740 on board the ship "Sally of Coleraine". They arrived at the port of Philadelphia and went to Bucks County, Pennsylvania. In the 1780's, shortly after the the close of the American Revolution, Samuel moved along with his family to the west branch of the Susquehanna River and settled near the mouth of Pine Creek in Northumberland County (now in Lycoming County), Pennsylvania. He and Mercy spent the rest of their lives there.1,2 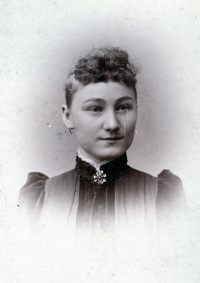 b. 15 June 1854, d. 20 May 1939
Family
Robert Jackson Melat was born on 15 June 1854 in Rockland Township, Venango County.1 He was the son of John Ralston Melat and Sarah Ann Kramer.1 He married Cora Ella Glines on 1 September 1884.1 He died on 20 May 1939 in Franklin, Venango County, at age 84.1 He was buried in Franklin Cemetery, Sugarcreek Borough.1
Robert Jackson Melat started out as a laborer in the oil fields and later operated a store in McKean County, Pennsylvania.1 He moved his family to 147 Grant Street, Franklin, Venango County, in 1903.1

He was employed by the Pennsylvania Railroad until his retirement in 1921.1