b. August 1828, d. after 1900
Family
Almira Hastings was born in August 1828 in New York.1 She was the daughter of Richard D. Hastings and Lydia (?)2,3 She married Ezra Thomas Amy, son of Abraham Amy and Laura Smith.1,4 She was still living after 1900 in Knox County, Kentucky.1
Almira Hastings and Ezra Thomas Amy lived in Little Cooley, Athens Township, Crawford County, Pennsylvania, where Ezra worked as a farmer.5,6,7 She appeared on the census of 1880 in Athens Township, Crawford County, Pennsylvania.8 She was enumerated in the household of her son-in-law Jeffrey A. Steele on the 1900 Census of Knox County, Kentucky. The household consisted of Jeffrey Steele, his new wife Alta A., Alta's son Burt D. Davenport, his son Jeffery Steele, and his mother-in-law, Almira Amy.9

b. June 1858
Family
Jeffrey A. Steele was born in June 1858 in West Virginia.1 He married Alta Roselph Amy, daughter of Ezra Thomas Amy and Almira Hastings, in 1900.1
Jeffrey A. Steele was listed as the head of a family on the 1900 Census of Knox County, Kentucky. The household consisted of Jeffrey Steele, his new wife Alta A., Alta's son Burt D. Davenport, his son Jeffery Steele, and his mother-in-law, Almira Amy.2 He and Alta Roselph Amy were living in Hignight, Bell County, Kentucky, in 1910 where Jeffrey was a foreman in the coal mines.3 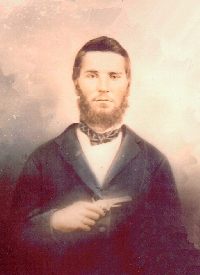 b. circa 1836
Family
James O. Barbary was born circa 1836 in Virginia.1 He was the son of Allen Barbary and Mary (?)2 He married Mary A. Reed, daughter of Abraham Reed and Martha Pratt, on 30 September 1860 in Knox County, Tennessee.1,3
James O. Barbary served as a private in the Confederate Army during the Civil War. He enlisted on 15 May 1863 at Stawberry Plains, Tennessee in Levi's-Barr's Light Artillery Battery from Virginia.4 He and Mary A. Reed were living in Barbourville, Knox County, Kentucky, in 1870.5 He and Mary A. Reed were living in Poplar Creek Precinct, Knox County, Kentucky, in 1880.6 Not located in the 1900 Kentucky Soundex [DKM, 2003].

b. circa 1832
Family
Mary A. Reed was born circa 1832 in Tennessee.1,3 She was the daughter of Abraham Reed and Martha Pratt.3,4,5 She married James O. Barbary, son of Allen Barbary and Mary (?), on 30 September 1860 in Knox County, Tennessee.1,2
Research Note:
DRAFT: The evidence that Mary Ann Reed who married James Barbary was the daughter of Abraham Reed and Martha Pratt is circumstantial based largely on the 1850 census ennumeration of the Martha Reed household in Knox County, Tennesee. It is my assertion that Mary Ann Reed Barbary is the same person as the Mary Ann Reed based on consistency of the age of Mary Ann in the census records, 1850 age 18, 1870 age 38, 1880 age 48, with an approximate year of birth being 1832. There is another Mary Ann Reed in Knox County during the same time frame, ennumerated in the household of Jacob and Esther Reed. In the 1850 census, that Mary Ann's age was recorded as 16 with an approximate birthdate of 1834.3,5,4
Mary A. Reed and James O. Barbary were living in Barbourville, Knox County, Kentucky, in 1870.6 She and James O. Barbary were living in Poplar Creek Precinct, Knox County, Kentucky, in 1880.7

Family
Isabella Dobbs was the daughter of Stephen A. Dobbs.1 She married James Marshall Robbins, son of William Milton Robbins Sr. and Eliza E. McLaughlin, on 16 January 1907 in Atchison, Kansas.1 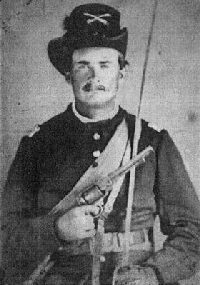 Josephus Robbins and Mary Ann Robbins left Ohio soon after the birth of their daughter Sarah and settled in Livingston County, Illinois, "on the south side of the Vermillion River" with several other families and relatives from Ohio.10 By circa 1855 Josephus Robbins and his family moved to Greencastle, Sullivan County, Missouri.11
While living in Missouri, Josephus answered the call of his country during the Civil War. At the beginning of the war, he joined the militia, serving for six months. He was mustered into the regular army by 31 August 1862 when he was on the rolls of Company G, 2nd Missouri Cavalry, holding the rank of captain of his company. He was later promoted to the rank of major, in which he served until he resigned on 24 December 1864. On or about 20 January 1863, in the line of duty, Josephus broke his left leg while crossing the Missouir River at Herman, Missouri. His leg was imporperly set leaving his leg crooked at the joint. His leg remained week and being in this condition, he was not able to mount his horse or walk without great bodily pain.12
The Robbins family remained in Missouri until in 1867 when they moved to Wolf River Township, Doniphan County, Kansas.13,14,15 In 1890 the Robbins family moved to Everest, Washington Township, Brown County, Kansas, where Josephus and Mary Ann remained the rest of his life.16,15,17
Josephus Robbins was a farmer.14
According to his obituary, Josephus was "a professed christian for twenty-five years and a member of the M.E. church, Everest, Kansas, for fifteen years, having acted as stewart for a number of years. He will be greatly missed as a loyal member of the church, a patriotic citizen, a kind neighbor, a loving father and a devoted companion."15
According to his pension application, Josephus was 6 feet tall, about 160 pounds, dark complexion, black eyes and black hair.12
The physician attending him at his death had this to say about his physical condition: [He] showed first symptoms of acute desqamative nephritis about July 10th 1905, subcutaneous aedema, febrile movement preceded by chils, anorexia, pain in loins, dry skin, palled countenance, dropsiral effusions into peritoneal and pleural cavities, scanty urine, speoif [sic] gravity about 1020, albumen in great abundance, impaired vision, coma preceeding and death following on September 10th at 2 o'clock A.M. 1905. Pericarditis was the complication in the case, and although there was no obvious causation, exposure to cold seems to have been the only causative factor." Another deposition gives the cause of his death as "kidney disease due to old age."12
While his war injury left him permanently disabled and at times unable to work his farm, it apparently did not dim his spirit. According to Josephus' obituary, "Major Robbins was very patriotic and a great lover of his country.... In municipal affairs he always took an active and leading part, always working for the best interests of the town [of Everest]. Three times he was the choice of the people for Mayor of Everest, his last term not having expired at the time of his demise."15

Concerning Mary Ann's family, the name of her father is not known, but according to the 1900 census record for Mary Ann and her sister Catherine, their father was born in Pennsylvania. Mary Ann's mother was probably Margary Sherman who in 1850, at the age of 50, birthplace unknown, was living with the John Edenfield household in Fincastle, Eagle Township, Brown County, Ohio. Mary Ann's sister Catherine married John Fulton and lived in Doniphan County, Kansas.6,7,8
Mary Ann Robbins and Josephus Robbins left Ohio soon after the birth of their daughter Sarah and settled in Livingston County, Illinois, "on the south side of the Vermillion River" with several other families and relatives from Ohio.9 In 1890 the Robbins family moved to Everest, Washington Township, Brown County, Kansas, where Josephus and Mary Ann remained the rest of his life.10,11,12